Stop unwanted behavior before it’s too late! Dogs tend to get into trouble in our homes – going in the trash, chewing furniture, barking out the window, bolting out the open door, chasing the cat, and and even other things like growling when they don’t want to get off the couch. It’s so frustrating when we say “NO!” and it doesn’t stop.

For many dogs, that “NO!” doesn’t really mean anything, because there’s no actual consequence. Here’s a dog trainer tip that is quick and easy to help make that “NO!” have some value: the bonker! 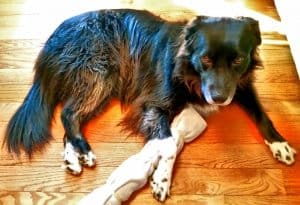 ​The “bonker” is a rolled up towel that is taped or rubber-banded so it stays rolled. It can be used to toss at the dog or actually to “bonk” the dog on the head. Bonus – it’s just a towel, so it won’t hurt the dog!

Here’s an example of how it works: Fido likes to bolt out of the front door when you come home from work. He has gotten out before and ran toward the busy street before you caught him. Every time he escapes he could easily be hit by a car! This time, you are prepared with the bonker. You open the door, Fido attempts to fly through the opening, and you bonk him firmly on the head. He might look a little confused, but that is ok, because he is learning. Close the door, pretend to leave and then return. Open the door again. Fido makes a half-hearted attempt to rush the door. Again, you bonk him on the head. The third time you try it, Fido makes no attempt to approach the door! This is awesome!

Another example: Spot likes to get used tissues from the trash, tear them up, and eat them. You see Spot pull something out from the trash and start to chew. You say “No!” and then chuck the bonker at Spot. It hits him, and he is surprised and unsure as to what happened. But, he moves away from the paper he was chewing. Again, awesome!

Many of these bad behaviors can lead to death (bolting into traffic, ingesting foreign objects) or being turned into the pound (chewing furniture, growling, etc), and no one wants that to happen. Once you begin using the bonker to stop these issues, keep in mind that consistency is very important to permanently stop these unwanted behaviors (and keep your dog safe and in your home). Remember, dogs may try their tricks again once or twice, so keep those bonkers handy.

For more information on bonkers, check out this video by Gary Wilkes, who invented the bonker!