What are Structured Dog Games? What is Structured Playtime? Basically, it is when you do some fun activity with your dog like tug, fetch, etc., but you have your dog stop the play every so often and be calm or practice an obedience skill before resuming.

For example, you play tug with your dog. You both are exited and having a great time. If your dog knows the OUT command, you can ask the dog to OUT the tug toy, but then once the dog lets go of the toy, immediately go back to playing with it together. So you are practicing the OUT command in a situation where your dog is highly excited and it is more difficult for him to listen. 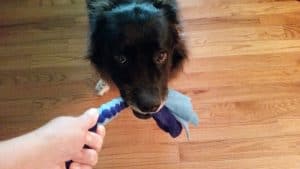 Another example is with the “flirt pole,” which is a pole with a bungee rope at the end which has attached a lure of some sort, usually some type of dog tug toy. You have the dog in a down, whip the flirt pole around (the dog is excited but has to exercise impulse control to remain in the down), and then you release the dog to chase after and catch the lure. Once the dog catches it and shakes it around a bit, you can have the dog OUT the lure and go back into a down. Here you are practicing 2 commands in a situation where the dog is excited and anticipating being released to chase the lure.

These type situations are both fun and mentally challenging for your dog, so it’s great training while being pretty fulfilling to your dog!

For more help from The Active K9, contact us!